In an earlier posting, I asked “why does coffee work for etching knife blades?” It’s all the rage and it does work. [stderr]When I don’t know something, I use a simple algorithm: ask. Nowadays, in the internet era, asking will sometimes collect you a flood of bullshit, or “I don’t know, but…” answers. But I’m fortunate that I have this wonderful and knowledgeable Commentariat(tm) that I can ask. So, I did. And Commentariat Member and Chemist Charly responded thus:

To form magnetite, Fe3O4, various chemicals and usually also heat must be involved. The black that you get from treating the steel with cold FeCl3 is most likely a mixture of several oxides and it is not very stable or durable.

The black you get from coffee is most likely something akin to what you get when you treat steel with tannic acid -click-, i.e. the acidic tannins in the coffee form organic compounds with the iron in the steel.

If you have oak, fir or hickory bark available, you can grind it and test whether it works just as coffee does. I would bet my money that it does.

Do I have oak bark available? Well, I live in Pennsylvania, which is like Texas except with lots more trees, including oak. Out here the road crews just lop chunks off of trees and throw them by the side of the road; wood is generally a low-value commodity (although I saw a power company truck lugging a lovely cherry burl in the back, once) and all I needed to do was drive slowly past a couple piles of cutoffs until I found some oak. I looked for something fresh. Pull over, open the hatch, throw it in, drive off.

How do you shred the bark off a log? Well, that’s really easy if you have a wood lathe! You cut the end straight so you can mount a chuck ring on it, and pop it in the lathe, put down a tarp to collect the shredded bark, and spin it up. 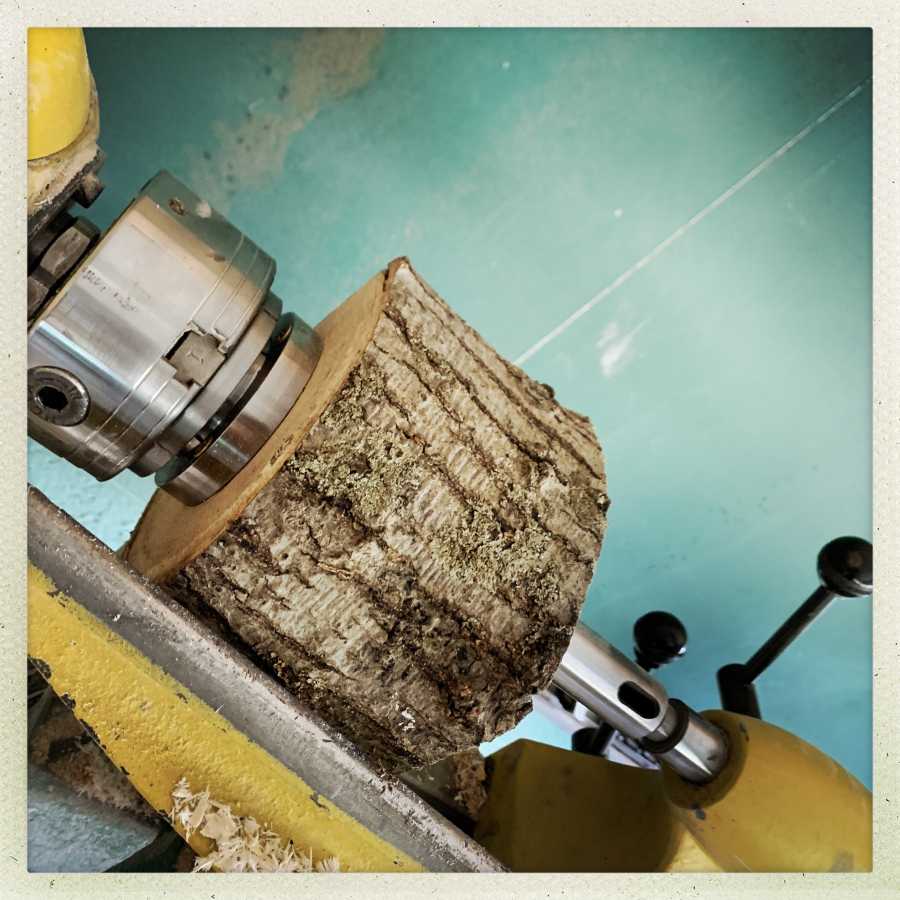 If you look closely at the picture above, you can see the jaws of the chuck locked into the ring, and the screws that hold the ring into the wood. That’s how lathe-workers do stuff nowadays – it’s much much safer than the old spike-and-spinner approach. YOu can see, on my tailstock, I have an extension in the taper, which makes it easier for me to get in close to the action if I need to, without bumping up against the tailstock.

OK, so I got a free oak cup-oid out of the deal. The wood was a bit wet so it’s going to crack but I can chalk it up to “practice.” 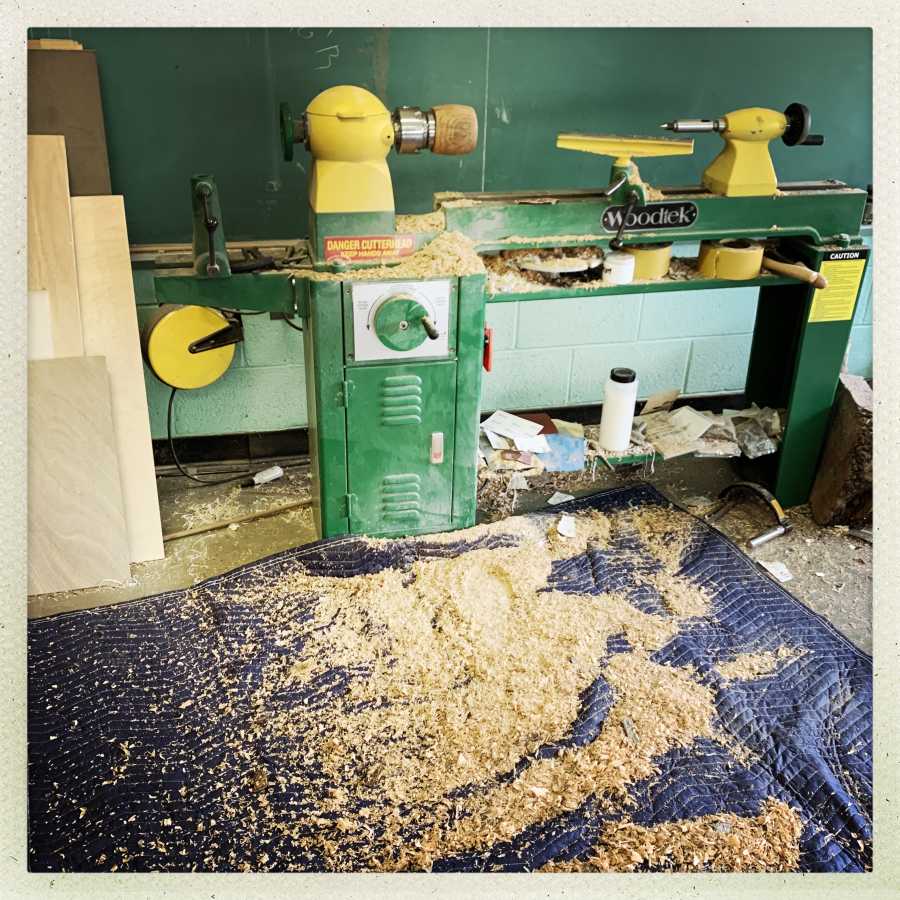 Another great thing about wood lathes: nobody comes along and says “OMG what a MESS you have MADE of your SHOP!” That’s what lathes do. When I was a kid my dad had a friend who did wood-turning and his lathe was half-buried in a small mountain of chips, which he cleaned up once a year. It was a fire hazard, but nobody said anything because lathes are just messy and that’s how lathes are.

Look at what a carbide gouge does to oak! It’s kind of scary how the stuff just turns to lacework when the carbide touches it. I thought oak was supposed to be “hard wood.”

So, I scooped a few handfuls of the lower strata (darker) which was mostly shredded bark, bagged it up, and took it home to my kitchen (aka: laboratory of evil #3) then brewed some oak drop soup: 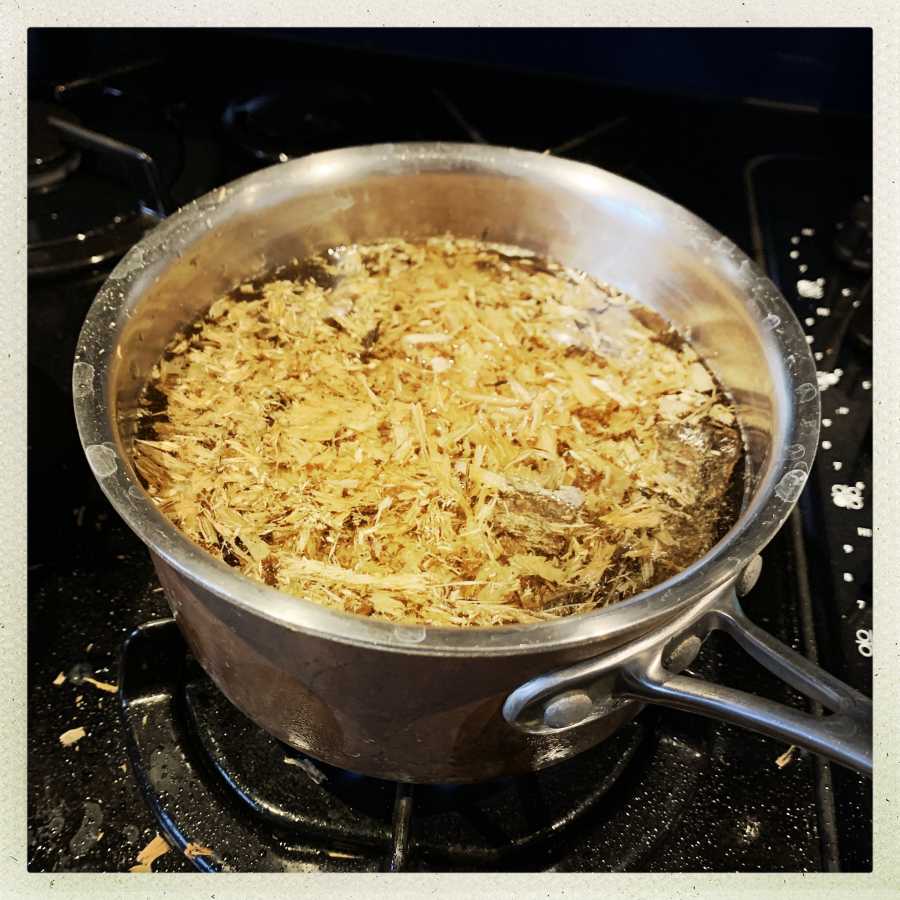 After that, I scooped off the shreds and poured them into my ‘observational etching tube’: 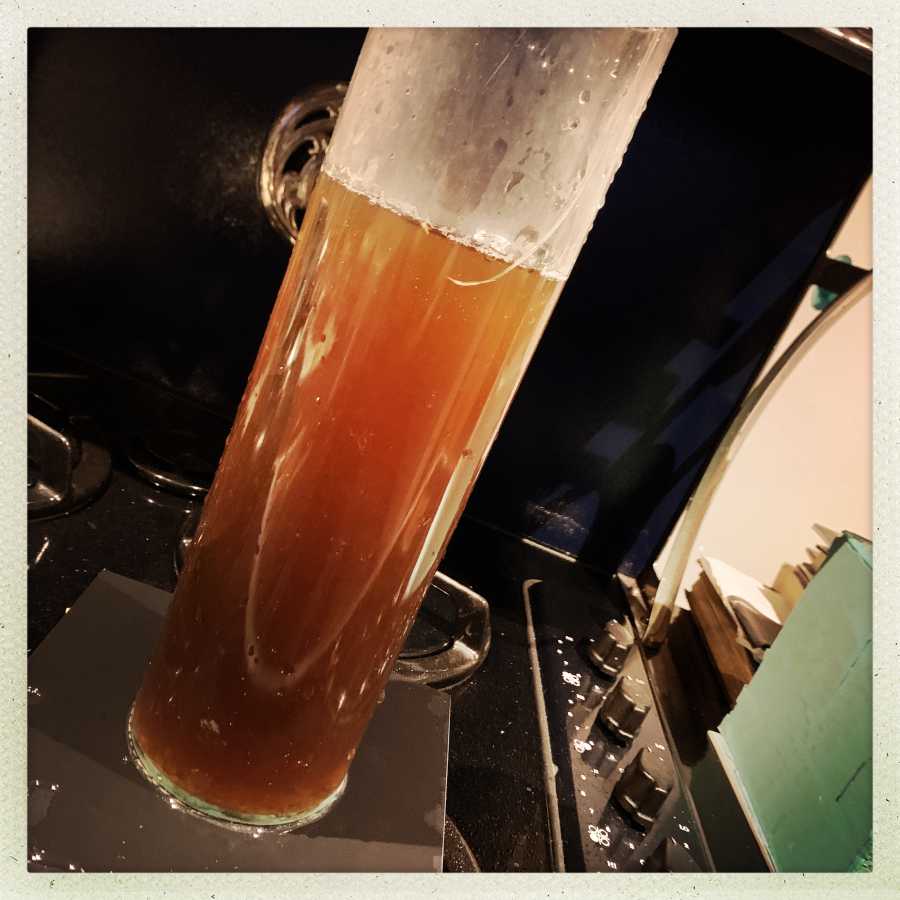 The base is just a piece of ABS plastic I cut on the table-saw, and the acrylic tube is held down with acrylic glue. To water-seal it, as well as to make a safe bottom for knife-points to be dropped on, I poured a layer of silicone liquid down at the bottom. Then, I dropped the whole thing and cracked the top. Anyhow, the tube is really useful since I can leave it sitting in the kitchen sink and check up on it every so often. Some coffee etch fans leave their blades in the coffee for 24 hours, but I am impatient and only gave it 6.

This is what Stabby O’Stabface from the County Stab looked like after 6 hours. When it went it, it was mirror polished with 3000 grid sandpaper.

Score one for Charly! Oak bark is a lot cheaper than coffee and it tastes better than that instant shit, anyhow. Now I have to socialize this idea with knife-makers who will probably do what knife-makers usually do and yell “its tradition!” and keep using much more expensive coffee. Perhaps if I sold oak bark and coffee prices, they’d switch.

One thing that’s interesting is how the metal behaves – sometimes the 1095 goes black and the wrought iron stays bright, and other times it flips around. When you’re using something like 15N20 the 15N20 stays bright, always (the ‘N’ in the designation means it has some nickel in it) So, that’s some science, completed.

This is another one I etched in the oak drop soup: 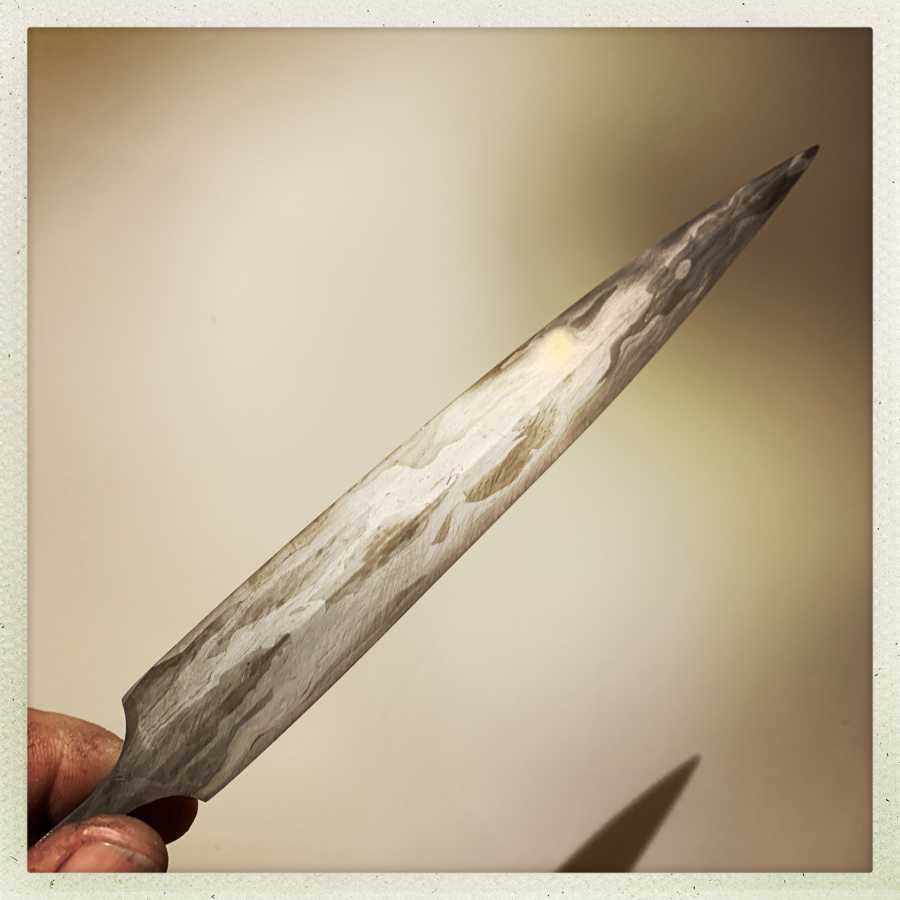 That’s a letter opener I am making out of compressed motorcycle chain, with a core of 1095. I still need to get the scratches polished out, which is going to be a monster pain in the neck. Working on a blade like that is nasty; you can cut yourself from any side of it very easily. It’s a letter opener, by the way, because “daggers” are illegal in Pennsylvania where it’s a felony to make or carry one, but if I wanted to I could wander around with my Uzi slung across my back, it being a “rifle” and a totally legitimate hunting tool.